A Clear View of Paradise

Dallas may be a fair stretch away from the Texas Gulf Coast, but the trip never stopped Bill and Suzanne Hutchison from making it their destination of choice for many getaways. They liked it so much in fact that the couple bought a home in Port Aransas several years ago. At first it seemed ideal. Their house faced the bay, provided great views of the water, and the sunsets were spectacular.

That is until someone purchased the lots in front of them and built a huge house that obstructed their view of the bay and the sunsets. Then to make matters worse, the lot next to them was purchased and another house went up that blocked their view on that side as well. For Bill and Suzanne, it changed everything as they felt like they were confined.

“We liked Port Aransas, but with so much development going on, it changed everything. We felt we no longer had the views or the space we needed to really enjoy the coast,” said Bill. “We decided that if we were going to travel all the way to the coast, we needed better exposure to the water. So we started looking around for other options that could give us what we wanted.”

Bill and Suzanne began exploring and soon made their way to Rockport. There, they saw the Islands of Rockport and were immediately impressed in several ways. “The community looked really attractive and every lot was well spaced with lots of room,” said Suzanne. “We were also really liked the continuity of the architecture, the homey community and the pastel color palette.”

But what they really wanted was a house directly adjacent to the bay and that was exactly what the couple found at the Islands of Rockport. They looked at three lots and choose their dream location on the bay next to a canal for easy access to boating and fishing.

Best of all no one can build in front of their home. They have a clear view of paradise! 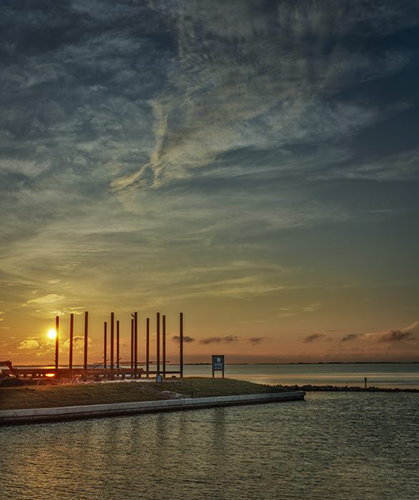 “It’s absolutely perfect,” said Bill. “We have the views we want, prevailing breeze in our face, and shade in the afternoon! We love being on the water, so we’re putting in two boatlifts, we’ll have a Jet Ski for zipping around in the water, and kayaks we can take to small islands nearby. Of course, we just go out about 23 meters into the Intracoastal Waterway and go anywhere easy.”

Construction has just started on their home which features a kitchen and master bedroom upstairs and three bedrooms downstairs. That spaciousness will come in very handy for the empty nesters as they host their large extended family during vacations and special occasions. The community amenities are a big draw for the couple too, like the gym where they can work out anytime.

Married for 33 years, Bill and Suzanne always had a view in mind of what they wanted. Now, with their new home at Islands at Rockport, everything is picture perfect. Especially the unobstructed views of the water and sunsets.